Imprisoned in Body and Mind:

by Martha Yeide and Elizabeth Spinney

Schools are thought to be great places to implement universal prevention programs, because large groups of children and youths are already gathered together there. If this is so, then by a similar (though perhaps twisted) logic, juvenile justice facilities are great places to implement substance use and mental health treatment programs. After all, there are large groups of youths with behavioral health issues gathered together there.

The sad reality is that every year thousands of youths suffering from substance use or mental health problems become entangled with the justice system. This means that justice-involved youths suffer rates of behavioral health issues that far exceed the rates for youths in the general population. Estimates suggest that as many as 70 percent of justice-involved youths have either a mental health or a substance use issue or disorder—or have both. The table below provides findings from recent studies on the prevalence of mental health disorders among juvenile justice populations.1 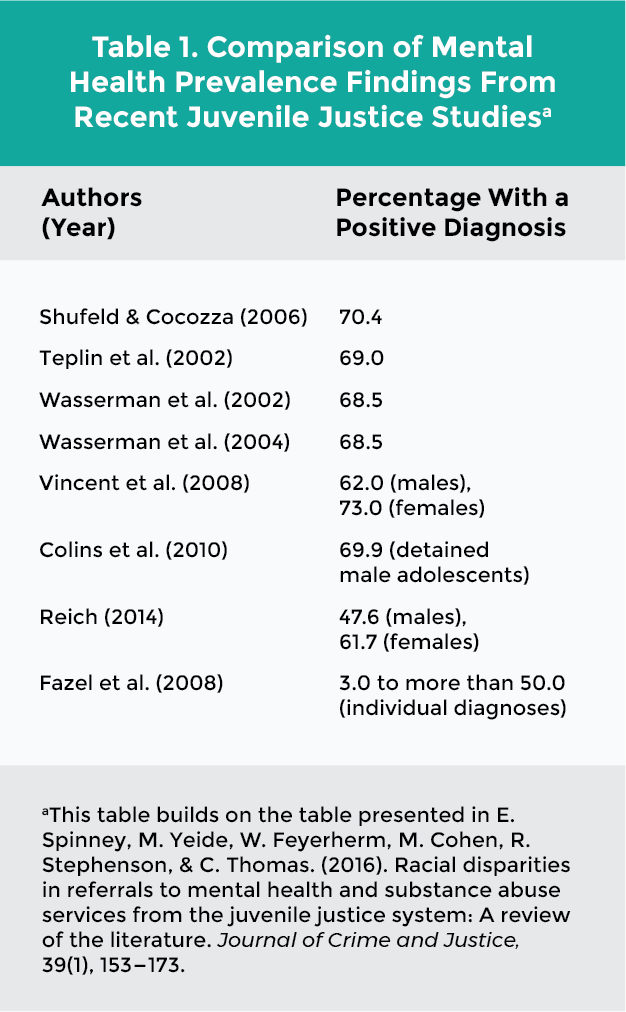 A Range of Diagnoses
The rates are quite stunning, and many youths may present with multiple diagnoses. One study of 1,400 youths found that, of the 70 percent who had one mental health disorder diagnosis, 79 percent met diagnostic criteria for two or more diagnoses.2 Interviews with juvenile detainees in Cook County, Ill., indicated that nearly two thirds of the males and nearly three fourths of females met diagnostic criteria for one or more psychiatric disorders. Among the same group, half of males and almost half of females had a substance use disorder.3

Studies that have looked at past traumatic exposures in juvenile justice populations have, unsurprisingly, also found that rates are high. For instance, Riggs Romaine and colleagues (2011) examined the legal files of 144 juveniles charged as adults in a Pennsylvania county and found that past traumatic experiences were noted in more than 71 percent of the evaluations.5 Rosenberg and colleagues (2014), in a study of trauma and psychiatric disorders in 350 court-involved youths in New Hampshire and Ohio, found that 94 percent reported at least 1 trauma, but the mean was 5.4 traumatic events.6

In a study of 64,329 juvenile offenders in Florida, Baglivio and colleagues (2014) found the participants had very high rates of adverse childhood experiences (ACEs)—such as emotional or physical abuse, household substance misuse or mental illness—which increase the risk of chronic disease, mental health and substance use disorders, poor academic outcomes, self-harm behaviors, delinquency, and reoffending. More than two thirds of the sample reported three or more ACEs, with females having a higher prevalence rate for all 10 ACEs.7

Limited Referrals to Treatment
Not only are these complex cases challenges to treat, but practitioners in the juvenile justice system also must do so with limited resources. Services are offered in most facilities,8 but only a small proportion of youths who need behavioral health supports and services receive them. Estimates range from a low of 4 percent9 to a high of 23 percent.10 Clearly, this population is underserved overall.

Given the low rate of referral, who actually gets treated? Studies that have looked at predictors of referrals have discovered that referrals are not necessarily based on a mental health diagnosis or need.

A recent study found that racial disparities play a role in who gets access to mental health and substance use services in the juvenile justice system.18 These disadvantages within the system only exacerbate the disadvantages experienced by youth of color in the community.

Treatment Works
Clearly, treatment is needed. More important, though, treatment works. For example, Hoeve, McReynolds, and Wasserman (2014) found that substance-disordered youths who were referred to mental health/substance use service referrals had lower recidivism risk compared to counterparts without referrals.19 Similarly, Evans Cuellar, McReynolds, and Wasserman (2006) found that juvenile probationers who were assigned to a mental health diversion program were significantly less likely to recidivate in the following years as compared with youth in the waitlist control group.20 Jeong, Lee, and Martin (2013) found that participation in a mental health intervention for youthful offenders was strongly associated with reduced recidivism compared to nonparticipation.21 Colewell, Villarreal, and Espinosa (2012) found that youths who participated in a pre-adjudication diversion initiative using specialized juvenile probation officers were less likely to be adjudicated for the initial offense than a comparison group who received traditional supervision.22

In short, system involvement is almost a sure indicator that behavioral health services are needed. And while youths benefit from these interventions, we as a society at large benefit by reduced long-term costs to the community. As practitioners and advocates for those with behavioral health issues, then, it is important to keep our attention on the juvenile justice system to ensure that it provides adequate care to a highly vulnerable population.

References
1For information on prevalence of substance use problems, see A. M. Kopak & S. L. Proctor. (2016). Acute and chronic effects of substance use as predictors of criminal offense types among juvenile offenders. Journal of Juvenile Justice, 5(1), 50.